The Silica Rich Rocks in the Berkeley Hills 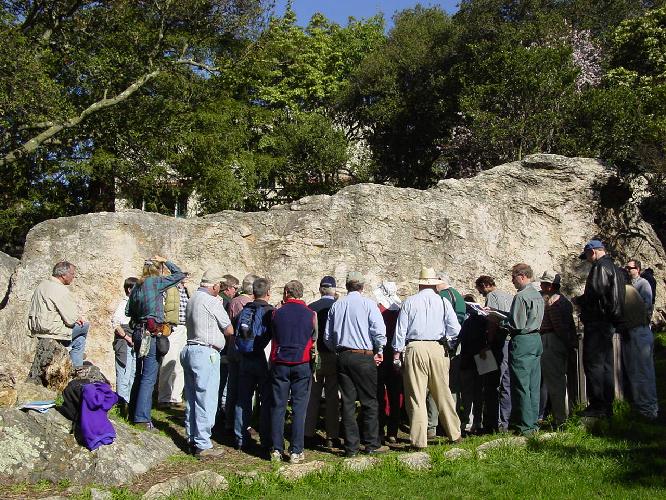 What could be a better way to spend a warm, early spring day than hiking between the quaint neighborhood parks in the Berkeley Hills in pursuit of enigmatic silica-rich volcanic rocks? What do these well known climbing rocks look like and what are their origins? These were the questions that NCGS members and friends attempted to answer on their field trip on Saturday, February 22. 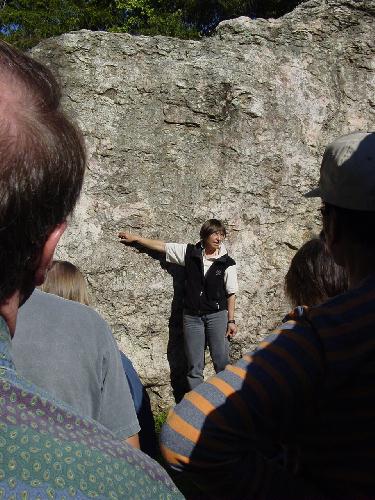 Our field trip leader for the day was Lin Murphy who studied these rocks for her Master’s Degree at California State University, Hayward. We met at Indian Rock Park off Marin Circle in Berkeley where Lin gave us an overview of the day. In the morning we hiked through the neighborhood parks of Indian Rock Park, Great Stone Face Park, Hinkel Park, and Mortar Rock Park. After lunch we walked from Cragmont Rock Park to Remillard Park. 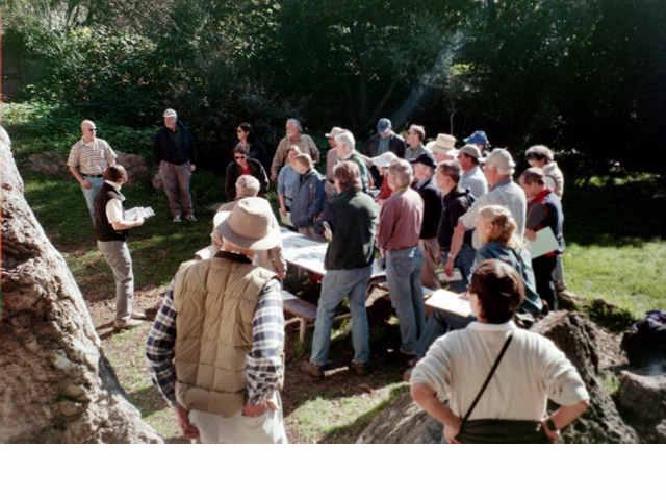 These unique rocks have been well known to local rock climbers since the 1930’s. Generations of climbers have honed their skills on these rocks as they trained for the Sierra Nevadas. Notable early climbers include Dick Leonard (the ‘father of technical climbing’) and environmentalist David Brower. 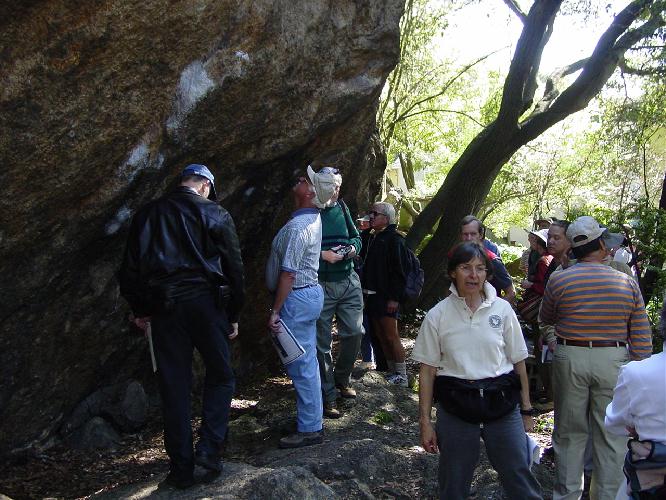 Scattered throughout the Berkeley hills are silica-rich (up to 99% quartz) volcanic rocks. In 1914 Andrew Lawson named the rhyolites in the Berkeley Hills “Northbrae” and “Leona” after the residential areas where they crop out. He originally interpreted these rhyolites as Pliocene volcanic flows. Later the Northbrae rhyolite was mapped as part of the Leona rhyolite that is currently interpreted as part of the Jurassic Coast Range Ophiolite. However, Lin’s work demonstrates that the Northbrae and Leona differ from each other in their outcrop morphology, petrology, geochemistry and age. 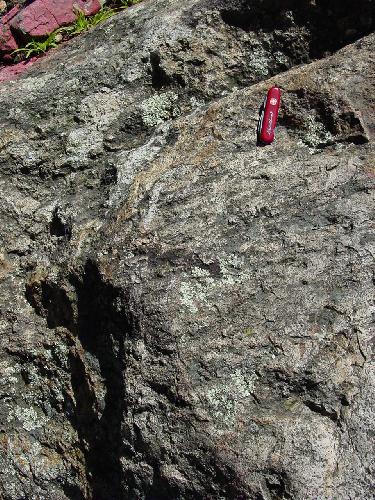 The most distinctive features of the Northbrae are the planar flowbanding and brecciation textures. The scales of the flowbands vary from millimeters to several centimeters, and this texture suggests that the Northbrae formed as a viscous volcanic flow. As the flow cooled, the viscous flow-bands broke into clasts (autobrecciation). In contrast, the Leona contains no flowbanding or brecciation.  In outcrop appearance the surface morphologies of the Northbrae rocks are frequently rounded and in some cases are highly polished. In contrast, the Leona forms generally featureless and massive outcrops that are fractured, weathered and crumbling. 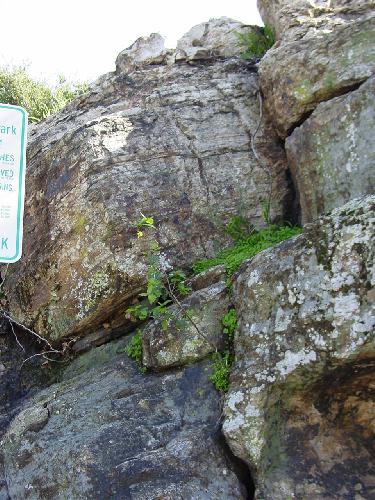 Flow banding and the polished morphology of the Northbrae Rhyolite.

The petrology is also different. The Northbrae contains spherulites, which are radial arrays of crystal fibers that form as the flow begins to crystallize. Later most of the primary textures were silicified with feldspar being replaced by single crystal quartz and microcrystalline quartz. The Leona does not show silicification features. 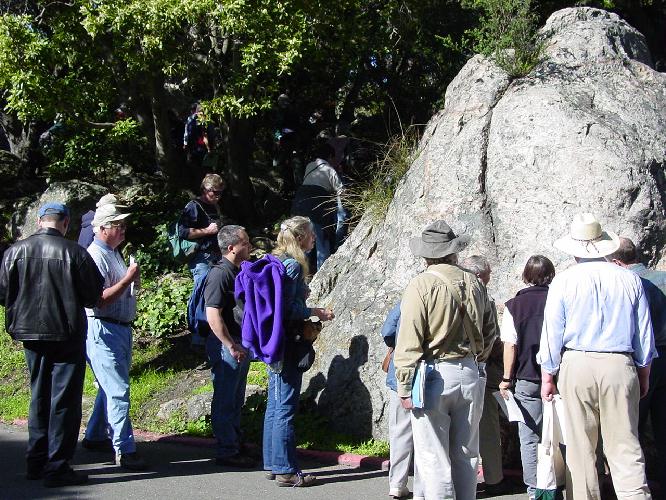 The geochemistry also varies between the two rhyolites. The Northbrae has a light rare earth element (REE) enrichment in most cases and a negative europium anomaly. In contrast, the Leona shows a flat REE signature similar to the altered silicic volcanics of the Coast Range Ophiolite. The Northbrae has intermediate values for potassium and sodium, while the Leona has higher sodium and lower potassium values. The Northbrae and Leona also plot in very different fields on the Pearce tectonic discrimination diagram. 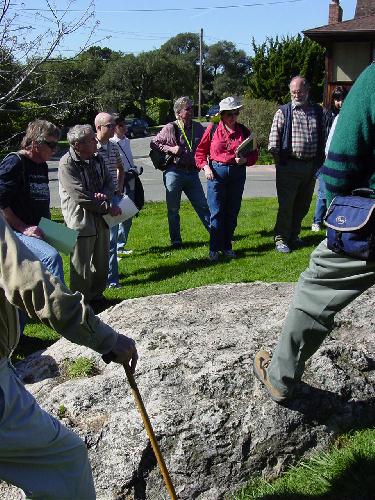 A final distinction comes from age dating. In the spring of 2002 Lin collected 150 pounds of Northbrae rock for dating, and zircons were selected from crushed rock samples. Fleck and Wooden of the USGS in Menlo Park dated the zircons from two different outcrops of the Northbrae. Uranium-lead dating yielded a late Miocene age (11.5 m.y.) for the Northbrae. The Leona is still considered to be Jurassic. 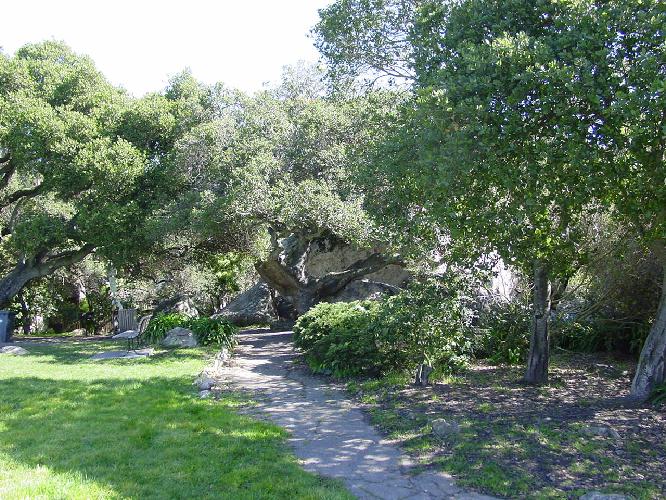 Thus it appears that the Northbrae and Leona rhyolites are distinct rock units and they have different petrogeneses. The Northbrae is now recognized as a unit of the late Cenozoic volcanics that have erupted throughout the Bay Area. These volcanics may have formed in response to the northward migration of the Mendocino Triple Junction. An alternate hypothesis is that they formed by volcanism along leaky transform faults that occur throughout the area. 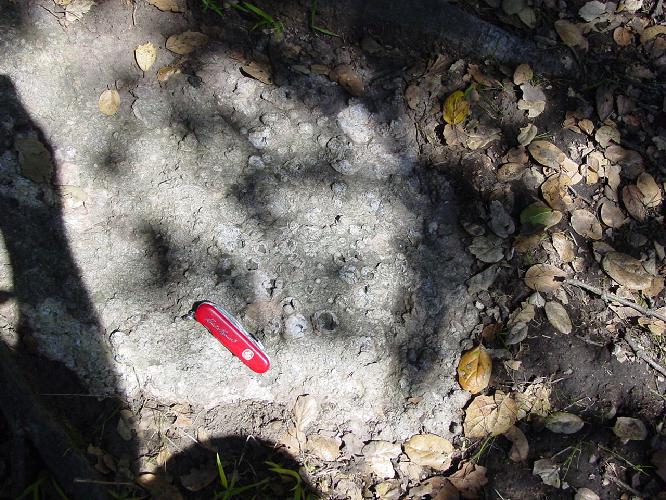 For lunch we were graciously invited to the Berkeley home of NCGS member John Stockwell. John has amassed a large collection of thunder eggs from all over the world, and they fill most of the rooms of his home. The Northbrae rhyolite on Spruce Street was the source for the well-known Berkeley thunder eggs.

Thunder eggs are spheroidal nodules that are typically a few inches in diameter. Thunder eggs form in some types of silica-rich volcanic rocks such as rhyolite. As the molten volcanic lava cooled, steam and other gases trapped in the lava formed an expanding bubble. Silica minerals often crystallize around the bubble or grow crystal fibers that radiate outwards from the center. The mineral-filled bubbles with a radiating structure are called spherulites. Sometimes gas pressure can force the spherulite apart to form a central hollow that is later filled with more minerals. Later drying out, shrinkage and cracking of the silica gels or clays filling the cavity can produce the star-shaped pattern typical of many thunder eggs. Still later, silica-rich solutions may enter the cavity and fill it with banded agate, chalcedony, clear quartz crystals or even amethyst. Solutions of different composition seep in at various times, leaving behind several layers of different minerals. 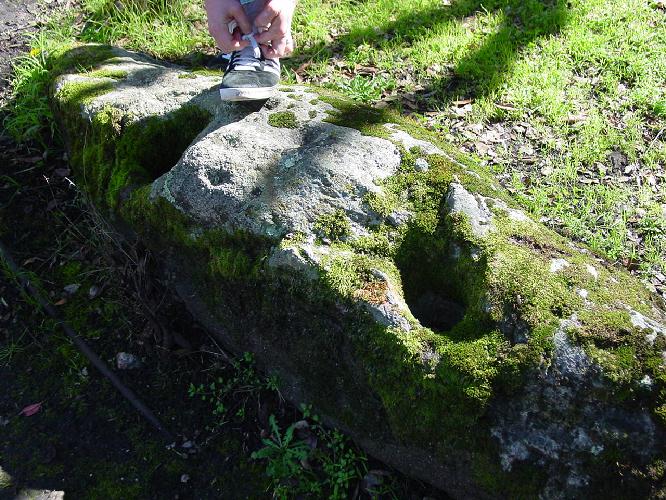 The final stop of the day was at Remillard Park where we looked at an entirely different rock — a massive outcrop weathered to a red color by iron oxide staining. Dibblee described this unit as Franciscan chert. Now, however, this unit is known to be a silica carbonate. The silica-carbonate formed by hydrothermal alteration of serpentinite. Numerous serpentinites are found in the Bay Area, and they are derived from the weathering of peridotites. Peridotites are thought to be obducted oceanic mantle. Geochemical analysis shows high levels of nickel and chromium in the silica-carbonate and is consistent with a mantle origin. 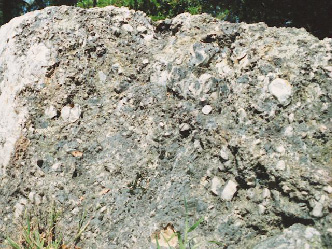 The NCGS sincerely thanks Lin Murphy for leading this excellent field trip. Her field guide can be used by NCGS members who missed this trip to conduct their own self-guided tour of these interesting rocks. Jean Moran did her usual excellent job in organizing the trip, handling trip registration, and arranging transportation. We thank to Tridib Guha for lunch arrangements. Finally, we thank all of the drivers for use of their cars and vans.